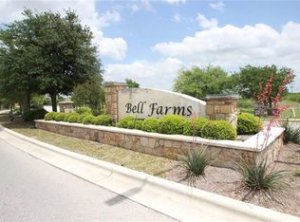 Bell Farms is a residential community located in the city of Manor and is one of a number of Manor area neighborhoods that is a top choice for first time homebuyers.  The first homes in the subdivision were constructed  in 2005 by NuHome, a subsidiary of Lennar Homes,  which, at the time, was in the process of closing out the Greenbury subdivision. Because of this overlap,  you will find that some of the same floor plans in Bell Farms can also be found in Greenbury.